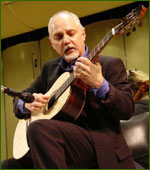 On Sunday we went to Church at BCC. The praise and worship music was great, as it always is, but there was a special surprise. Phil Keaggy was playing lead guitar (yes, we rock out in Church) that day and he played a special song entitled ‘True Believers.’ Phil is a legend in the Christian music industry, yet I had never heard any of his music. I was totally unprepared for what I heard.

The song featured Phil by himself with an acoustic guitar. It began simple enough with a him strumming and singing. Then he stopped and began playing percussion on the face of the guitar. He had an effect pedal that allowed him to sample and playback in a loop what he had just played, so after playing percussion for 4 bars, he started strumming the guitar again. The percussion part he had played just before looped behind him. He kept adding more and more parts to the point where he was a one man band. On top of all this was a great song!

There has only been one other time where a musician has blown me away from the start and yet kept going and going, totally blowing my mind with what is possible on an instrument. The other time was on October 26, 1995 when Omar Hakim did a drum solo in the song “I Burn For You” during Sting’s Dream Of The Blue Turtles world tour.

Omar started his solo just slamming and it just kept getting better and better. The same thing was happening with Phil’s song. It started out good, but it just kept getting better and better. Sure I had heard musicians use loops to build a song before, but not done this smoothly and this well. Just when I didn’t think it could get any better, or any more impressive, Phil Keaggy flips is guitar up to his face, ala Jimi Hendrix and sang into the pickup of his acoustic guitar! I’ve never seen THAT before.

The effect created was akin to a far away reply and he did it four times so that it would loop behind him as he sang the chorus again. I was completely floored. Tears were streaming down my face because I was simply not prepared for this musical onslaught. I was a deer in the headlights.

Throughout the whole performance, the thing that made the biggest impression on me was Phil Keaggy himself. He’s a fairly diminutive man with short grey hair on the sides, but he plays with such enthusiasm and joy it’s clear that you’re watching a legend at the top of his game. It was like watching Michael Jordan or Lance Armstrong doing what they do. He was so relaxed, yet completely filled joy that it was just bursting out of his music. He may be just a guy with an acoustic guitar, but he was tearing it up!

When he finished his song, he was given a standing ovation. Even though BCC is a bit of a charismatic church, I can’t recall the congregation ever giving a standing ovation before. Clearly I was not the only one affected by his music. Now I’m a big Phil Keaggy fan and I’m going out this week to get a CD so I can hear more of his work. I just can’t believe someone didn’t turn me on to him earlier. How could such a gem be hidden like that? :O