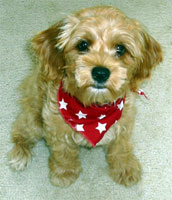 All the while I was doing the work I had been called in to do, everyone was pressuring me to take the dog home. Although I wanted nothing more than to do just that, Holly and I had not discussed it and I just couldn’t see her saying yes. There’s too much going on right now and we’re in the middle of a tiling project, yadda yadda yadda. Besides, I’ve used up my “get out of jail free cards” with some bicycle and gadget purchases that were not discussed before hand, so I knew my luck was up. I don’t know how I did it, but I managed to resist the urge to scream yes at the top of my lungs and rush home with the little dog.

On my way home, I called Holly to let her know how strong I was. I told her the whole story and my intentions were to simply get a pat on the head for being so strong. However, when Holly said in her oh so sweet and gentle voice, “Michael, if you want the dog, you can have the dog.”, my jaw dropped. I was in shock. “I can have the dog?” I asked. “Yes..” I don’t know what she said next, because all I could hear was my tires squealing as I slammed on the breaks and turned the car around. Back at my client’s office, I bounded up the stairs in search of my client. I must have had a goofy grin on my face because of the employees said, “Are you getting a dog?” in a gesture of happy teasing. 5 minutes later we were driving back to my house.

I’m not an expert, but my best guess is that she’s a Cocker Spaniel with maybe something else mixed it. Holly thinks she could have some Irish Setter in her too. I don’t know that I ever would have picked this breed from all my books and magazines, but she seems perfect to me. So, what’s her name? Well, I named her “Gracie” because it was by the grace of God that she found me.