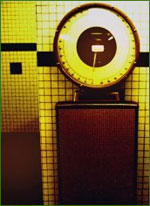 As a child, I was always the smallest, skinniest one. Everyone was bigger than me. I’m not kidding, everyone. My father was 6 feet tall, so I kept waiting and waiting for this big growth spurt to happen so that I could tower over everyone I grew up with. High school came and went and no spurt. Then in college I figured I’d pretty much topped out at 5′ 10″ and that the spurt wasn’t ever going to happen. I was wrong. Since we’re three dimensional beings, growth can happen in many directions. My growth spurt did start in college, but instead of it making me grow vertically, I began growing horizontally. In other words, I started getting fat. 😛 Up until my senior year in high school, I was very active in soccer and other activities. Weight had never been a problem, so I could eat anything I wanted. Just before Christmas 1984 I broke both my knees (that a whole other story) and after that, I had to give up soccer and most activities involving running. I just couldn’t take the stress to the knees. So, after that accident my level of activity dropped significantly. When I was in college, I was either pounding the books, or sitting in a practice room playing my trumpet. Not a lot of activity, but I never really got too heavy, just a little out of shape. The big decline in my weight was when I joined the

SIF. That was a nightmare job that had me working days on end without sleep. One of the habits I developed there was working all night and then going home at 6am to shower and change clothes and then go back to work. That kind of thing happened a lot. Lack of sleep coupled with having to be on the road a lot eating fast food put on the pounds and I can look back at pictures taken at company events and each year, I was weighing more and more. Eventually I had the presence of mind to leave that crazy place and strike out on my own – I started my own consulting firm. At first I was specializing in insurance technology, but when I moved to Nashville, I decided to focus on pure technology. The technology industry isn’t known for Heroin Chic, in fact it’s quite the opposite. So as I spent hours upon hours in front of a computer, my body continued to puddle. I think if you cross sectioned my belly, it might read like the rings of a tree. 😉 The good news in this tale of ever expanding waistlines, is that I’ve never felt that the condition wasn’t fixable. My underlying thought process was that my increase in girth is due to the fact that I’m not active. In my heart I’ve always felt that if I got active again, the weight would eventually come off and I’d be back to my old self. I simply haven’t stayed active long enough to prove this theory. 😀 Sure, I’ve done some cycling, or spent some time in the gym, but there is always some crisis at work that pulls me away from my routine and everything settles back like sediment. So I found it rather surprising that so many people were commenting, “Have you lost weight?” I dismissed the comment, thinking that I just got lucky with a slimming outfit, or that they were just being nice. However, I’ve been getting these comments for the past few weeks and it got me to thinking. Why would people think that I lost weight? I haven’t been exercising, or doing anything different. Well, the only difference in my routines is that I’m walking Gracie 2 to 3 times a day. Oh that can’t be it huh? You mean to tell me that just by walking a few blocks a day is going to help me lose weight? Is my lifestyle so lethargic that simply by moving in an upright position I can lose weight? Oh COME ON! This morning I got on the scales. I just knew that this was all a farce and that my weight hasn’t changed one bit. I hate our scale with a passion because it never moves downward. So, I stepped on the scale just knowing that there wasn’t going to be a change, yet in total shock, I discovered that I have lost 5 pounds. It would seem that by simply taking little 5 minute walks, two to three times a day has put a dent in my downward decline! Woo Hoo! As I continue to build on my FlyLady Routines, I will begin incorporating going to the gym and cycling more. That should help pick up the rate of reduction. Until then, I’m happy in the fact that baby steps have yielded such unexpected rewards!