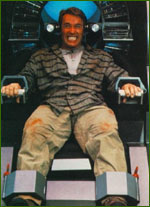 It’s a shame, but I think most people find technology to be a pain in the ass. In fact, if a piece of equipment is a pain in the ass, then I think it’s labeled with the moniker of technology. Douglas Adams (of Hitchhiker’s Guide To The Galaxy fame) was on Tech TV’s Big Thinkers television show awhile back and to paraphrase one of his comments, he said that if something works, then it becomes ubiquitous and transparent in our life. Take your toaster for example. Most of us wouldn’t consider a toaster a technological item. You simply put your bread in and in a few minutes you have toast. If the darn thing stops working, you simply go out and buy another one. However, if you have an item that you need, that isn’t easily replaceable and it doesn’t work all the time then it’s technology. So, if you really think about it, technology could be defined as “crap that doesn’t work.” The biggest problem is that many of us have too much technology in our lives and as a result end up having a negative perspective on it. How many people do you know that when you mention a computer, scoff or throw up their hands and claim to be illiterate? Are they truly illiterate, or do they simply have a low threshold for “crap that doesn’t work.”

I work with technology constantly and have created a business based on it, so you’d think that I just love it all and that everything just works for me. That, of course, couldn’t be further from the truth. Often times it feels like nothing ever works for me, but I have a theory that a person’s career is based on the level of pain that person can endure for a respective field. I worked in a law office once and realized that my threshold for pain in regards to law was very low. If I had to work in a law firm, I’d go insane. Yet, I can take untold heaping piles of pain and frustration with technology, ergo I work as a technology consultant. Think about what you do for a living and consider the amount of grief involved in it. Am I wrong? 🙂