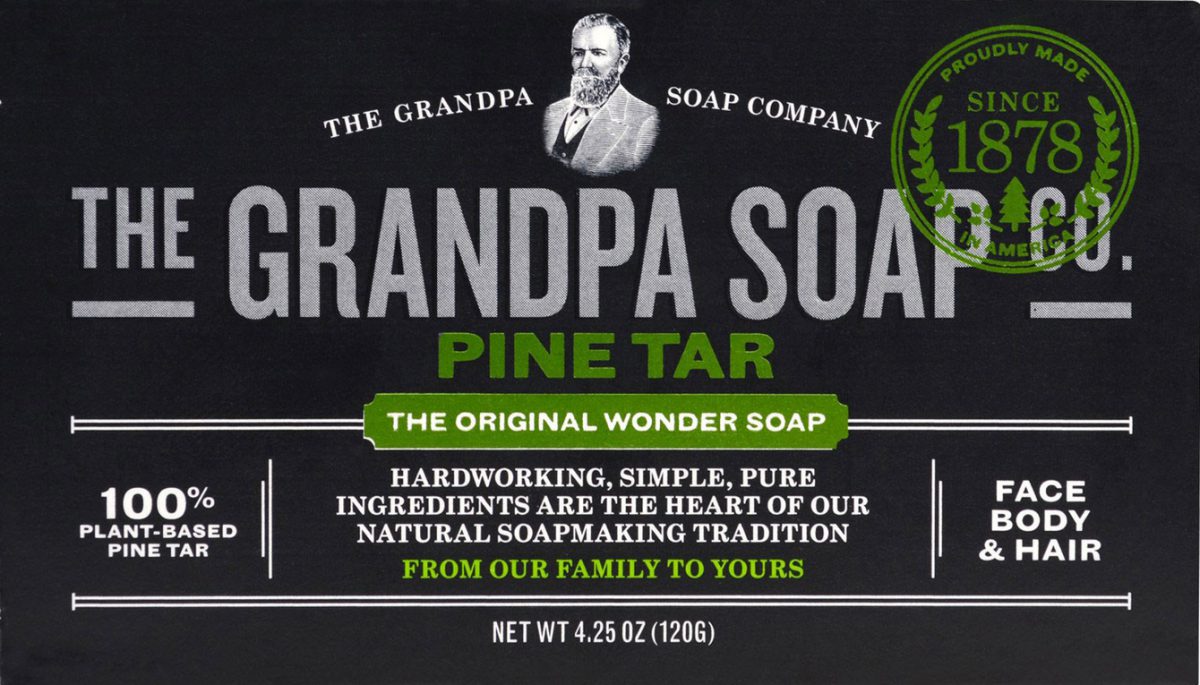 A few years ago I stumbled upon a company called Rivendell Bicycle Works and I knew that I had found a home for my bicycle interests. No glitz, no glamor, just good bicycle stuff that works. I identified with their philosophy immediately because it was just like my own when it came to cycling. If you’ve been a reader of this weblog, you’ve no doubt heard me refer to Rivendell more than once and I look forward to their catalogs in my mailbox. I pour over each page and read all the details about the products that they offer. Surprisingly, Rivendell sells more than just things related to bicycles. If they find a product that strikes their fancy they try to add it to their catalog. One of the items that has always caught my eye was Grandpa’s Pine Tar Soap.

“This is our most popular item, and almost all who use it have sworn off other soaps except as a last resort. Oddly enough, women tend to hate it. It has a stong piney scent that remind you (and them) of the woods and maybe that gives them the creeps. But it cuts through armpit stench like no other soap, rinses clean, is a fantastic shampoo (no more plastic bottles, herbal essence, faux French names, and false promises). Try it once and you’ll be back. We sell the biggest size, a full 4.25oz. which is larger than the size you see in progressive natural food stores – $4 Rivendell Bicycle Works Spring/Summer ’04 Catalog

Now if you’re anything like me, you probably just read that and said “Ewww!” I know that’s what I thought the first few times I read about the soap. Not to mention the fact that bathing with a soap that “women tend to hate” is not something that is high on my list of things to do. I’m a geek for Pete’s sake, I need all the help I can get. I don’t need another challenge to contend with.

So for the past few years, I’ve skipped adding Grandpa’s Pine Tar Soap to my Rivendell orders. Then about a month ago I was ordering a pair of arm warmers and I decided to try one cake just to see what it was like. Maybe it was the fact that the guys at Rivendell have never steered me wrong before, or that I was just feeling like taking a walk on the wild side. Whatever it was, I ordered a bar just to see what all the fuss was about.

When my package arrived, I opened it up and immediately smelled something funny. It smelled like tar. It smelled like pine too. “What the hell was that smell?” I thought to myself and it quickly became clear that it was Grandpa’s 1878 all-natural recipe for soap that was permeating the air. I took out the bar of soap from the packaging and was presented with a dark brown cake.

Now I understood why the line on the box that read “Lathers White”. Lifting the soap up to my nose I took a sniff and almost passed own. DAMN that smell was strong. So there I was holding a cake of soap that looked like a square turd and smelled like a road construction crew standing next to a pine tree thought to myself, “You bathe with this stuff?!?”

Knowing that this little experiment would make for a good weblog entry if nothing else, that’s exactly what I did. The next day I was in the shower trying out this new super-fragrant cake of soap and was pleasantly surprised. Although the soap itself is almost overpowering by itself, it doesn’t leave a heavy scent on your body after bathing with it. In fact, I’d say it’s quite faint. The lather is indeed white and not brown and it does a fantastic job of cleaning as well. I have to say that I quite liked it after the first try, but the real test was with Holly. After my first shower, I asked Holly to smell me and she said I smelled “Kinda nice”. She described the smell as a little woodsy, but that once you put on cologne and got dressed, it wasn’t even noticeable. In other words, unless you don’t use cologne, or wear only a swimsuit to work, then no one is even going to really notice what soap you used. 🙂

Now that the soap had passed the “this won’t gross out your wife” test, I continued using it and after a few more showers the idea occurred to me that I could use it as a shampoo as well. I’ve never been a big fan of using soap as a shampoo I’ve always used a bottle of something unless there was no other choice, but it was the ingredients that won me over.

I remember getting a little dandruff in high school and the doctor told me to get a tar based shampoo and that it would clear up. That’s what I bought back then and sure enough it did clear up. I don’t have dandruff, but if tar makes for a good ingredient in shampoo, I figured it was worth giving Grandpa’s Pine Tar Soap a shot. So I did and I found that I liked the way it cleaned my hair. Not only that, but I liked the way it made my hair feel as well.

My hair is fairly fine in nature and doesn’t have a lot of body. I’m always envious of people like George Clooney who have such thick hair instead of the straight, flat fine hair I have on my head. And just to be clear, I’m not saying that my hair is thinning, or that I’m losing it, just that it’s naturally fine. Always has been and hopefully always will be. But after I began using the soap on my hair I found that it felt and acted a bit thicker. It was easier to style and didn’t take as much product as it used to, so I now use it both for bathing AND for washing my hair. Guys like simplicity and there’s nothing more simple than a cake of soap.

One Negative And One Surprising Positive

As much as I like this soap, I did run into small problem. I found that using the soap to wash my face caused me to break out. It took a few showers for this problem to present itself, but I did see an increase in clogged pores after using it on my face. I don’t know what skin type my face is, but I wouldn’t call it oily by nature, nor would I call it dry. However, the pine tar did make it a little bit more oily than normal, so I stopped using it on my face.

That one negative aside, I did find a surprising positive to help balance the scales. My wife, like most women I would presume, don’t take a shower everyday like most men do. However when my wife does take a shower, I notice that the bar of soap is a great deal smaller the next day. File this under a pet peeve of mine, but I hate getting in the shower the day after Holly’s shower, only to find a sliver of a piece of soap in which to bathe with. It’s not that I mind that she used all the soap, it’s the fact that she didn’t replace it. 😐

Now that I use Grandpa’s Pine Tar Soap, I have a cake of soap all to myself. Holly has her soap and I now have mine and all is right in the world. 😛

If you’re not loyal to your brand of soap, I would encourage you to give Grandpa’s Pine Tar Soap a shot. It may be a little bit more than what you’re paying for soap right now, but in my opinion it’s worth it. In fact, I’ve just added soap to the list of things worth paying a little extra for. Other items include toilet paper and garbage bags, I mean is it really worth saving $1 to have to deal with sandpaper on your butt and garbage juice on your toes? Sorry, we touched on another pet peeve didn’t we? 😉

Rivendell didn’t steer me wrong in it’s marketing of this product and I now happily have 6 bars of the stuff under my sink so that I don’t run out and have to revert to something as urbane as “Coast”. Don’t let the strong smell of the soap itself scare you away either because although the scent is concentrated in the cake and doesn’t translate to your skin. I think Grandpa’s Pine Tar Soap is a real find and if you’re adventurous enough to try some, I think you’ll be impressed and join the cadre of happy users just like me.