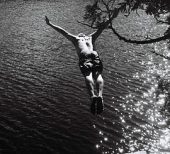 I’ve been thinking about migrating to the Mac for about 3 years now. OS X really won me over when it came out and I’ve been playing with it off-and-on since 10.2 when I switched Holly over, but using an old Bondai blue iMac isn’t the best of environments. So I stuck with what I knew — Windows — waiting for the time when I could make the leap. Well, today is the day. What started the switch was the fact that the new Intel based Macs allow you to run Windows via BootCamp. This free boot loader allows you to install Windows in a separate partition and thus dual boot your machine. So when it starts, you can either load OS X or Windows XP. The rub is that you have to reboot if you want to switch the OS. Then came Parallels Desktop For Mac, which allows you to run Windows within Mac OS. With this product, you no longer have to reboot, you simply launch Windows from within OS X. The bottom line is that you can run Windows in a variety of ways on a Mac. 🙂

The second nudge that happened was that Tennessee is having a “sales tax holiday” this weekend, which starts today. It’s designed to give parents a break as they get ready to send their kids back to school, but anyone can take advantage of it. Any computer under $1500 can be purchased tax free. With the tax rate here in Nashville of 9 3/4% that works out to about a $150 savings. Stopping by CompUSA yesterday, the final nudge came when I saw that they are having a 5% sale on all Macs. You never find sales on Macs namely because the margin is so small that there is simply no room to give a discount. I don’t know how CompUSA is doing it, but this means that I can save another $50 on the MacBook I’ve been looking at. Yesterday afternoon, I called Justin, the Apple rep at CompUSA and asked him how many of the MacBook models he had in stock and he said 9. There has been a lot of buzz about the Sales Tax Holiday, so I know that a lot of people have been holding off buying a new computer until this weekend. I asked Justin if there was a way to hold one and he explained that if I were to purchase a gift card in the exact amount of what the purchase price will be, then he could hold it for me. 45 minutes later, I had a CompUSA gift card in hand in the amount of $1045. 😛 So now I’m off to go pick up my new baby. CompUSA is opening at 7am this morning and I want to be the first in line, since I’ve already paid for it. I’ll keep you posted as to my progress in making the switch, but I’m just happy that I won’t have any more Mac Eye For The PC Guy!