It’s been about a month since Gracie passed and things are getting a little better. Our friends and family have been very supportive in helping either by checking in on us, or not when we’re slow to respond. Personally, I’ve found it very difficult to return phone calls for some reason.

END_OF_DOCUMENT_TOKEN_TO_BE_REPLACED 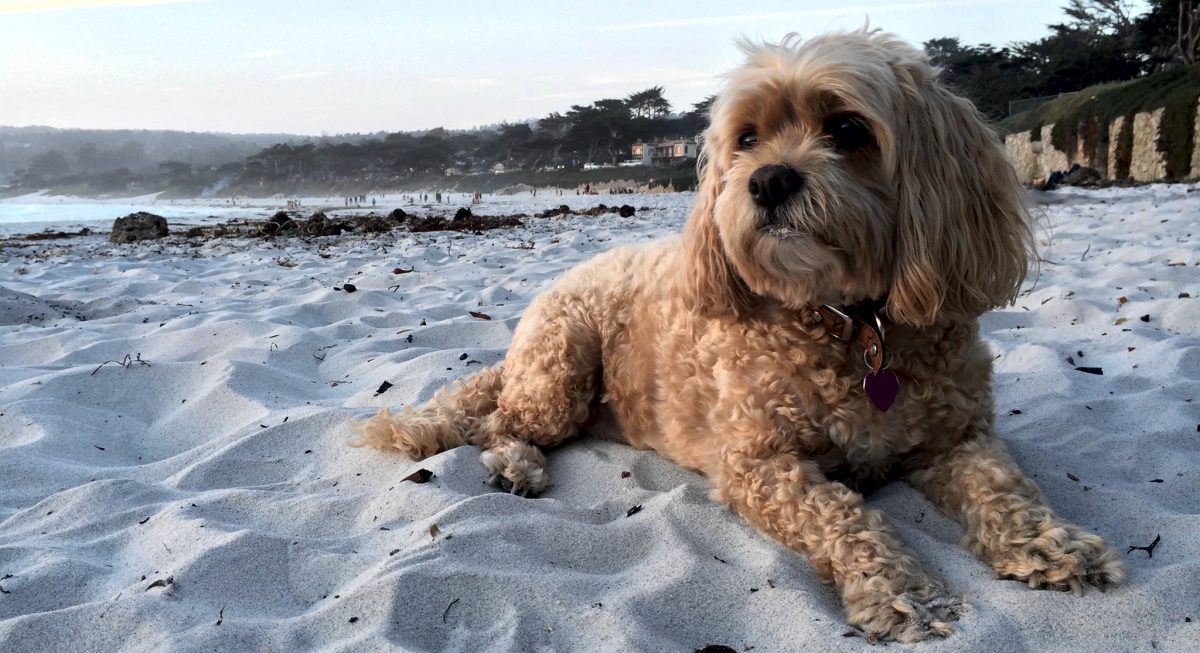 On Friday, December 8th at 10:30am, our dog Gracie passed away from congestive heart failure. She was one-in-a-million and blessed our lives for over 14 and-a-half years. We couldn’t have asked for a better dog and we were sorry to see her go but it was her time and, thankfully, she went peacefully.

She was born with a heart murmur and we knew that, in time, it would probably present a major issue as she grew older. Although she had overcome a tumor on her stomach over 3-years ago, we learned early this summer that her murmur had become a major issue. Thanks to the overwhelming support and stellar care provided by Dr. Courtney Merrow, DVM at PedMed and the staff at Blue Pearl we did everything we could to prolong her life as long as possible. Unfortunately, her body stopped responding to the diuretics, as we were told they would, and the fluid build-up became too much. With no more remaining options, we put her to sleep.

END_OF_DOCUMENT_TOKEN_TO_BE_REPLACED

As I woke up this morning, the alarm on my pa1m0ne Tungsten C was going off in an attempt to remind me of something. I rubbed the sleep out of my eyes and padded my way over to the chest of drawers on top of which my PDA lay beeping. I picked it up and looked and the white screen with a full screen message in blue text announcing that today is Gracie’s birthday.

My first reaction was that of glee. I was reminded that it was this time last year that Gracie found me and that today was her special day (if only to me). Yet in the next breath, I was reminded that Gracie is no longer a puppy and that made me just a little bit sad. That little tinge of sadness only remained for a moment, but it was palpable. For a fleeting instant I quickly went through the statistics of what a dog’s average life span is and how much longer I have with her in my life. Morbid as that may be, the thought of not having Gracie in my life is a thought I can’t bear to entertain. Hearing how Tyler Hamilton had to put his dog down yesterday perhaps put these thoughts more in the forefront of my mind. Whatever made me dive into these doldrums, I quickly shook my head to knock these thoughts loose, because today is a happy and special day, not a sad one.

END_OF_DOCUMENT_TOKEN_TO_BE_REPLACED

It’s been awhile since Gracie was last groomed and since she’s been playing with Tumini and Vegas (the neighbor’s dog) a lot, her hair became a bit matted in a few places. After dropping her off yesterday, the groomer called to let me know that they would have to cut her very short in order to get out the matted areas. Since it’s now summer, I had planned on getting her cut short, but not quite as short as the groomer had to take it.

There’s a dog that was a recent addition to our neighborhood. He lives just two doors down and goes by the name of Vegas. He’s a sweet puppy, but a big puppy although I don’t know what breed he is. He has the coloring of a Doberman, but his ears are a bit floppy. I’ve heard that Dobermans can get their ears trimmed to give them the upright ears they are know for and maybe his haven’t been trimmed. I don’t know, I’m no expert, but whatever breed he is, he’s sweet as can be.
His owner gives him a lot of room to run – the whole neighborhood in fact. Just about any time of the day, I can expect a brief visit from Vegas. He’ll run up, his tale wagging with bright happy eyes that seem to be saying “Hey! What cha doin’? Need any help?” I don’t like how he sometimes tramples our garden in order to come say hello, but he’s just so happy to see people that it’s hard to stay mad at him. Often times, as I see him run back to his own home, I wish that I could give Gracie some room to run and let her off the leash a little bit. I would never give her full run of the neighborhood like Vegas’ owner does, but some freedom would be nice.

Part of my resistance has been due to Gracie’s propensity for running to greet new people and/or animals. When I have her attention, she usually minds me, but when she’s been on the leash and a squirrel darts across our path, I’m thankful that she’s tethered to me. Walking through the neighborhood during our evening walk, I’ve felt the temptation to unhook the leash and let her run free a little bit, but my overwhelming fear that Gracie would tear off and not come back is too strong. I’d like to think that she’d stay close, but it’s such an unknown and if she were to run away, or get hurt, I don’t think I could take it.

END_OF_DOCUMENT_TOKEN_TO_BE_REPLACED

I love my dog. There’s no two ways about it, when I work from my home office, I get to spend the entire day with Gracie and I can’t describe the joy she bring me. Throughout the day, she’s my little shadow as I work, eat, and relax. I didn’t realize just how much being around her means to me until I had a particularly long day away from the house.

After a long day at work, Holly had a function with an organization she belongs to, so it was almost 10pm when we got home. After going through the usual routines of sorting the mail and shrugging off the gear from the day, I plopped down in the chair to catch the end of ER. Holly made the comment, “You want me to let Gracie out of her crate?” My mother had come by the house around 7pm to tape “Friends” for us and to walk Gracie, so I said “Sure.”

All dogs have quirks and Gracie is no exception. One of her quirks is that when you open her crate, you have to pet her belly before she’ll leave it. She gives you this dog eyed look that says, “Why did you leave me in this cage? Don’t you love me? Prove it to me by rubbing my belly.” Sometimes she’s so ready to get out, all it takes is a quick pass; however some days you could be rubbing that tummy for a good minute before she’s ready.

END_OF_DOCUMENT_TOKEN_TO_BE_REPLACED

A few weeks ago, I was standing in the kitchen taking my first sip of coffee and looking out the kitchen window. After I swallowed my delicious coffee, I uttered ‘Son of a bitch.’ Holly said, ‘What?’, and then looked out the window and said, ‘Awww crap.’ What were we bitching about? Outside our window was a little calico kitten sitting on the window ledge.
Having just nursed Monkey back to health and spending a fortune in the process, the idea of having to take care of another cat was not something either of us were looking for. We already have 4 indoor cats and a new puppy. The integration process seems to be never ending and throwing a new kitten into the mix just makes me cringe.

I went outside to check on this little kitten and saw that he/she had some worms but otherwise seemed healthy. It looked like none of the other cats on our block and our house backs up to a pasture, so I couldn’t imagine where this cat came from. I went and bought a small bag of kitten chow and the kitten just gobbled it up. Clearly it was hungry. What were we going to do?

END_OF_DOCUMENT_TOKEN_TO_BE_REPLACED

Just thought I’d give a quick update on the state of Monkey’s health. For those of you that haven’t been following, our cat monkey has been sick. I’m happy to report however, that he has rounded the corner and everything is looking great!

Earlier this week we took Monkey to the vet for some more blood work. The purpose of the tests were to see if the his liver levels had lowered to the point of being normal. When we admitted him to the hospital, many of his numbers were in the 1000 range, when they should have been in the 150 range. His last test showed that all of his liver levels were back to normal. Woo hoo!

END_OF_DOCUMENT_TOKEN_TO_BE_REPLACED

On Saturday afternoon, Holly and I went to the vet and picked up Monkey from the hospital. He had been there since Monday, so we were quite happy when we heard the news that we could bring our baby home. However, just because he’s home doesn’t mean he’s out of the woods just yet. His liver is beginning to respond to the treatment and that’s great news, but we still have a long way to go.

With his feeding tube still in place, we have been feeding him every 4 hours by injecting his food directly into his stomach with a syringe. The food is called A/D and it’s a canned food that you can only get from your vet. We mix it with water and then draw it into the syringe. In the morning we have to add antibiotics and supplements into the food. At night, we add just the antibiotics. The vet originally said that we had to do the feedings 4 times a day, but given the amounts of food that we have to give him, it’s worked out to 6 times a day and sometimes as many as 8. It seems every time I turn around, it’s time to give Monkey more food. 😛

END_OF_DOCUMENT_TOKEN_TO_BE_REPLACED

We took Monkey back to the vet yesterday and it’s not great news Monkey did not respond to the treatments that we were giving him over the weekend. His blood work showed that his liver was doing worse. So the next step was to leave him there at the hospital and let them take over the treatment.